There’s no doubt that having a well-lit work area is paramount to a safe working environment. That’s even more critical when it comes to emergency roadside repairs where not only having your work area illuminated, but being able to warn oncoming traffic you’re there, is literally something that can save your life. In today’s world there’s no excuse to not have quality hand-held LED lighting solutions for your emergency use (and in your workshop for that matter). If you’re still using an old D-cell incandescent flashlight, do yourself a favor and toss it and pick up an LED solution like the work lights from Mychanic.

We first got wind of these great LED lighting options last summer. Mychanic sent us several of their LED lighting options to try out and review both in our shop and on the roadside. We came away really impressed with the brightness and features along with rechargeable capabilities of several of the lights. If you missed that review you can read it HERE. Those LED work lights are still in use today with no issues. We’ve used them for vehicle repairs, home maintenance, and general emergency lighting when we lost power during a bad storm.

Today, Mychanic has expanded its line of LED work lights with two new and ingenious lighting designs. These new additions to the Mychanic LED lighting world include the Blade Multi Light and the Pod Light. The Blade Multi Light is a rechargeable LED lighting solution that features 250 lumens of light output encased in a tough plastic housing that has a 360-degree rotatable head and a pivoting body that moves 270 degrees. This allows the light to be placed in almost any position, and can be hung by its included metal hook or secured with its non-marring magnetic base. The LED lights feature white illumination in high or low, and red flashing illumination emergency modes.

The Pod Light is quite an interesting solution as well and we can see a lot of use coming to this one in our garage. The Pod Light utilizes a non-marring magnetic base that works with the metal lower half of the spherical light housing. Simply mount the base to a hood, fender, frame rail, etc. and rotate the Pod Light to illuminate your work area. The light uses standard AA batteries (included!) and has a low and high illumination setting and puts out 250 lumens as well. The light is perfect for interior or under hood lighting during normal routine service or in roadside emergencies. The Pod Light easily comes free of its magnetic base for hand-held use as well.

At $34.99 and $19.99, respectively, these two new LED lighting options from MYCHANIC are worth a look. They’re part of our LED lighting solutions in our shop now and we know you’ll get as much use out of them as we have in just the short time we’ve been testing them. Out of the package the Pod Light includes the light “orb”, the magnetic base, batteries, and instructions. The Pod Light body unscrews to access the battery compartment. The lower half of the assembly is metal to work with the magnetic base. The battery door is retained by two small screws. The screws are NOT captured in the compartment door, so when installing/replacing the batteries be sure to do it in a well-lit area where you won’t lose the screws. Sitting on its magnetic base the Pod Light can be rotated infinitely to put the light wherever you need it. The first press of the green power button provides the “low” setting, illuminating the perimeter LEDs. Pressing the green button a second time adds the large center LED for the “high” setting. The magnetic base has a firm retention on the steel we tested (garage door, underside of hood, side of tool box, etc.). We found it best to place the base first and then turn on the Pod Light and place into the base, rotating it to the position we needed for best lighting. Shown here fresh from its packaging is the Blade Multi Light with wall charger, USB charge cable, and instruction sheet. It does not come with a USB car adapter, but you can pick one of those up for usually a buck or two (if you don’t already have one or three like us) to allow charging in your Mustang. The Blade Multi Light’s ingenious ability to be positioned in almost any direction/angle means you can easily rotate the light and pivot the body to get the light exactly where you need it. The thin light housing means you can also slip it down between two surfaces for better visibility as well. Here we’re inspecting our engine drive belt. Normal lights would only allow you to shine down on the belt from the top of the engine bay but the Blade gets light right down in front of the pulleys with ease. The body of the Blade Multi Light includes a magnetic strip for mounting the light on a tool box, fender, rocker panel, etc. For newer Mustangs (and other Fords) with SMC or aluminum hoods the Mychanic people were smart enough to include this nifty hook for such surfaces where a magnet won’t work. The hook stores/locks like a padlock. Push it in to release the lock and pull the hook out of the lamp body. Push it in until it clicks to lock it back in place. The outer LEDs are white and where the low/high illumination comes from. The center row of LEDs are red and they have two functions, all flash at once, or in a “runway” strobe pattern, perfect for warning other vehicles of your location.
Mark Houlahan Tech Editor, Mustang Monthly 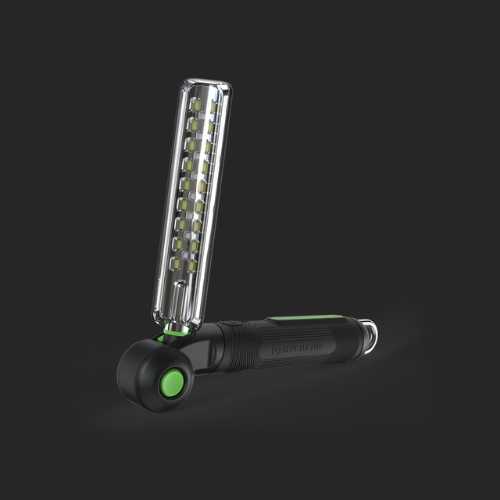 BLADE MULTI LIGHT A blade of light for the tightest spaces. Sold Out 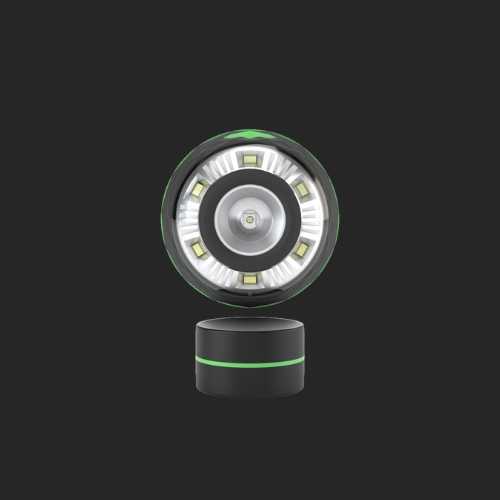 POD LIGHT Aim Light In Any Direction. Sold Out